Establishment of the School

In the year 2000, the law was amended to give financial and administrative autonomy by the Makerere University (Establishment of constituent college) (Amendment) order (MUECCA (A) 2001. As a result of this amendment, the school structure changed tremendously. The law created a council with authority similar to that of Makerere University Council.

Mandate of the School
The statutory order establishing the School mandated it to organize and develop business and commercial training in the country at the different level. “The objectives and functions for which the school is established are to strengthen the institute providing commercial and business education in order to provide high quality standards in the commercial sector through an increased intake of students and output of qualified personnel from the various degree, diploma and certificate programmes in commercial and business education”

In addition to the functions of Public Tertiary institutions under section 76, Makerere University Business School may-

(a) Provide instructions to those admitted to the school and make provision for advancement, transmission and preservation of knowledge relating to commerce or business.

(b) Create and offer opportunities to persons interested in courses offered through distance education methodologies from relevant commercial or business training institutions outside Uganda;

(c) Conduct examinations for the ward of degrees, diplomas, certificates and other awards of the University.

(d) Conduct other examinations and award certificates, diplomas and where necessary revoke awards.

(e) Co-ordinate and supervise all Ugandan government funded colleges of commerce with an objective of developing curricula and achieving high standards of business education.

(g) Conduct or facilitate conducting of research on any issue relating to commercial or business sector.

(i) Establish Linkages and joint programmes with other institutions offering similar courses within and outside Uganda.

(j) Carry on any other thing relating to the enhancement of standards in the commercial and business sector as the minister may direct.

The Merging Institutions
a) Faculty of commerce, Makerere University.

The Faculty of commerce was the leading institution in the provision of business and management education in the country and had grown in student’s registration from about 200 in 1991 to over 3000 students in 1997, a period of about 8 years. About 350 were government and the rest private. Of these 1500 were distance education students. The faculty was offering BCOM, BBA and MBA degrees and also organized short tern management training for business and government departments. It had a budget of internally generated finds of approximately Shs. 2 billion in the year 1998/99. The staffing levels were approximately 100 including full time and part time academic and administrative staff. the faculty was occupying the precast red brick building at the makerere University campus. It had no responsibility over the student’s welfare activities. These were handled by a separate department of the University. The Dean of students, like all other students in the University.

(b) The National College of Business Studies.

The National college of Business Studies was located at Nakawa and was a tertiary institution offering business and management diplomas and was also organizing professional training. It had a population of about 1200 government students and over 2000 private students at the time of the merger. The campus compound lay on approximately 45 acres with a variety of buildings including office and teaching space, staff residences and students hostels. The staffing, both administrative and academic was about 500 including staff who had been retrenched. These included 90 fulltime academic staff and about 50 part time staff. The rest were administrative staff. the retrenched staff were paid after the merger and left though some were retained to maintain services like kitchen, toilets and other facilities. The college offered different diplomas, the flagship of which were the Uganda Diploma in Business Studies (UDBS) and higher diploma in Marketing (HDM). The College administration handled both academic and administrative matters, including students’ welfare.

The Process started in January 1998 and was a very difficult one and indeed a learning experience. The objective of creating the School was stated then challenged the University to create a centre of excellence in Business and management education. However, the two institutions, which were merged, had different organizational cultures, practices and goals. The challenge then was to merge the two cultures and create a new direction. A direction to which all stake holders would subscribe so as to realize the vision of the people who conceived the business school. This involved integration of activities, values and systems to create a Unified institution. It required building a new mission and activities that would realize that mission.
Wherever there are changing conditions, there is always fear of unknown. In this case, the merging parties were uncomfortable with the change and with the unknown. There was suspicion and anxiety among the different parties. The first year of the merger was particularly difficult. There were problems tha emerged from within the school and other from Makerere. 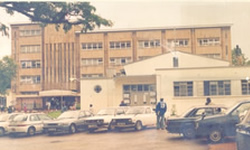 MUBS Main Main building, the then Administration block for NCBS. Adjacent was the conference hall